Cheryl Hung, StorageOS, sat down with Kaitlyn Barnard, Cloud Native Computing Foundation (CNCF), to talk about cloud native, the cloud native Meetup group in London, and being an Ambassador. Below is their interview. You can also view the video.

Kaitlyn: Thank you so much for joining me today to talk about your community involvement and our Ambassador Program. Can you tell us a little bit about yourself?

Cheryl: I’ve been involved with Cloud Native for a couple of years, I used to work at Google as a software engineer. Now I’m the Product and DevOps Manager at a London start-up called StorageOS, building persistent storage for containers, and I also run the Cloud Native London Meetup group.

Kaitlyn: You’ve been talking about storage recently. Can you talk a little bit about some of the trends and challenges you’re seeing the in cloud native storage space right now?

Cheryl: It’s definitely an evolving space, because containers were designed to be stateless and immutable so storage is not really a concern. Except that at the end of the day, pretty much everybody has data that they need to store somewhere! It’s clearly an unsolved problem about what’s the best way to do databases and other stateful applications with Kubernetes, which is why I work at StorageOS, because it provides that storage abstraction layer and that means you can run databases within Kubernetes and have replication and failover, etc.

In terms of what I see coming next, the Container Storage Interface is one of the big things to be aware of in the cloud native space. Over the course of the next six months to a year, all of the vendors, cloud providers, and cloud orchestrators are going to get behind this interface. So hopefully, by this time next year, storage will be a solved problem as far as end users are concerned. 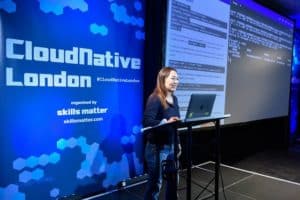 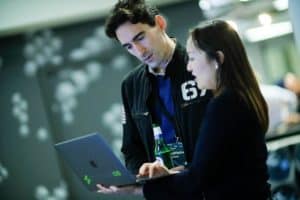 Kaitlyn: You run one of the largest CNCF meetups that we have. Why and how did you start the Cloud Native London Meetup?

Cheryl: I started it in about June of 2017. At the time there was Cloud Native Paris, Cloud Native Berlin, Cloud Native Barcelona, and there was a Cloud Native London, but it had been quiet and dormant for a couple of years. I thought this was a really good time to revive that Meetup and to bring in all the new knowledge, community, and interest around Kubernetes and Docker and also Prometheus, Linkerd, and all the other projects.

It was about bringing in people from all different interests, but all in the same infrastructure and DevOps mindset and having a space where people can teach others as well. So I really encourage new speakers to join and share their stories, because there’s always a mindset around, “Oh, am I good enough to do public speaking?”. I see it as part of my role as the organizer to tell people that, “Yes, your stories are interesting and people do want to hear from you.”

Kaitlyn: Why did you want to be a CNCF ambassador?

Cheryl: I’m probably one of the truest cloud natives in that when I joined Google, I was 21. I was using Borg, which was Google’s internal predecessor to Kubernetes. Because I was so young, I really didn’t have a memory of how software was done before. So to me, it’s always been natural to containerize your software into running with an orchestrator, like Kubernetes, and to package it as microservices. It seems like the whole industry is moving that way. So becoming a CNCF ambassador has been about taking what I know and bringing that attitude, culture, tools, and infrastructure out to the entire industry. 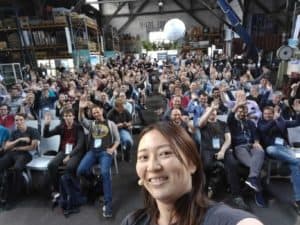 Kaitlyn: You travel a lot, I see you at a lot of conferences. What has been your favorite place that you visited so far?

One thing about being at all these conferences, when I was here last year at the Berlin KubeCon I really didn’t know anybody, I was completely on my own. This time, as I’ve been walking around, it’s been, “Hey, Cheryl” and “Oh, I know you,” “Oh, you run the meetup, right?”. That’s been awesome, that’s been fantastic to have so many people get involved with the community, know about me, and come up and say hi.

Kaitlyn: It’s fun. Even though it’s 4,300 people now, which is crazy growth in the first place, it’s still a small community and everyone still kind of knows each other.

Cheryl: Exactly. And it’s still a really friendly and open community, which I love.

Kaitlyn: What do you do in your free time?

Cheryl: I’m getting married at the end of August! I’m incredibly excited about it, but it means that any time I’m not planning my work, my engineering team, and what they’re working on, I’m planning my wedding, which is a challenge in its own right! It’s a two day thing, a western wedding and a Chinese wedding, so I spend a lot of time negotiating with people about, “What kind of stationary do I like? What kind of flowers do I like?” It’s crazy!

Kaitlyn: Thank you so much for taking the time to speak with me today.

Cheryl: You are very welcome. Thank you for inviting me.