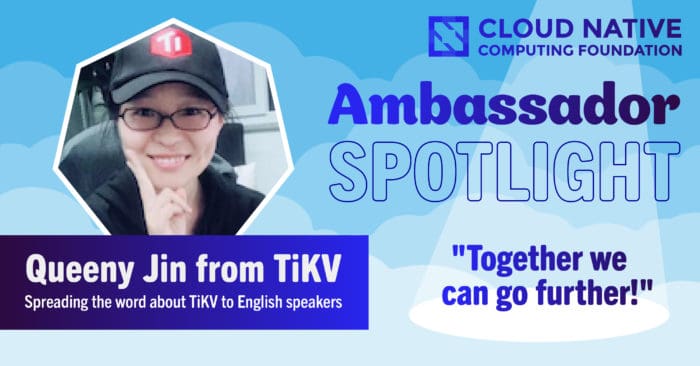 Our first ambassador spotlight goes to Queeny Jin, who has been spreading the word about the incubating CNCF project TiKV since its inception in 2016. She’s been working at PingCAP, the company that created the project, since May 2016, and “I am very lucky to witness the birth, the development, and the evolution of TiKV, both in terms of the project and the community,” she says. “It’s so exciting to see how popular TiKV is after it became part of the CNCF community. Now it has 7.2k stars and 230 contributors all over the world.”

As a contributor to TiKV, Queeny says, “I have witnessed the importance and influence of the CNCF community,” so she became an ambassador to “make a difference together in the Chinese open source community and CNCF ecosystem.”

Indeed, one of Queeny’s biggest accomplishments has been making the content created about TiKV by Chinese contributors available to a wider English-speaking audience. “I see the potential of TiKV being the foundation of future cloud native infrastructure all around the world, so I decided to organize a team of transcreators (not just translators),” she says. “The content published on the TiKV website, such as the documentation and the blogs, are all from this team.” (One of the blogs was the 4th most popular post in CNCF’s 2019 annual report, with 13,859 page views: Building a Large-Scale Distributed Storage System Based on Raft.)

Here’s a quick interview with Queeny about her work with TiKV.

What do you want the public to know about TiKV?

The TiKV project aims to enable and empower the next generation of databases by providing a reliable, high quality, practical storage foundation. We are in the process of graduating and would really love to have your support.

Do you have any shoutouts for the TiKV community?

Thank you, my beloved contributors, committers, maintainers, adopters, and especially the great CNCF community, for your great contribution and support in the past! I believe we are on the right track to make TiKV the foundation of next-generation infrastructure and have a very promising future ahead of us. Together we can go further!

Is there anything else you’re working on?

I would also like to advocate for another project, chaos mesh, a Chaos Engineering Platform for Kubernetes. Chaos Mesh is a versatile Chaos Engineering platform that features all-around fault injection methods for complex systems on Kubernetes, covering faults in Pod, network, file system, and even the kernel. It’s in the process of being reviewed for the CNCF sandbox.

What’s the best part of being an ambassador?

Exposure to all these cutting-edge cloud native technologies (a lot of them!) and meet other cloud native people with the same vision.