The bi-annual CNCF survey takes a pulse of the community to better understand the adoption of cloud native technologies. This is the sixth time CNCF has taken the temperature of the container management marketplace.

About the survey methodology & respondents

This was most responses we’ve received to date with 2,400 people taking part the survey, primarily from North America (40%) and Europe (36%) in Developer or IT-related roles:

The majority of respondents are from companies with more than 5,000 employees, skewing the results of this survey toward usage of CNCF technologies in the enterprise. The top industries are technology (22%), software (22%), financial services (9%), and telecommunications (8%).

This survey was conducted in English, and we have a Chinese version currently underway, the results of which will be available later in the year. You can view additional demographics breakdowns below: 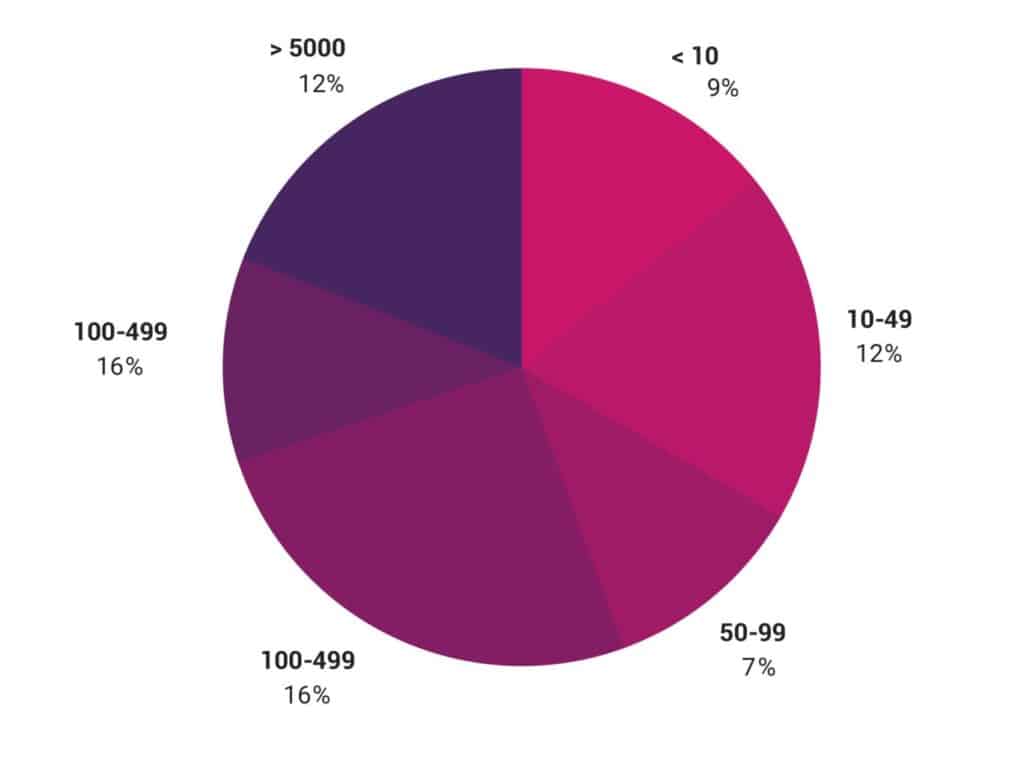 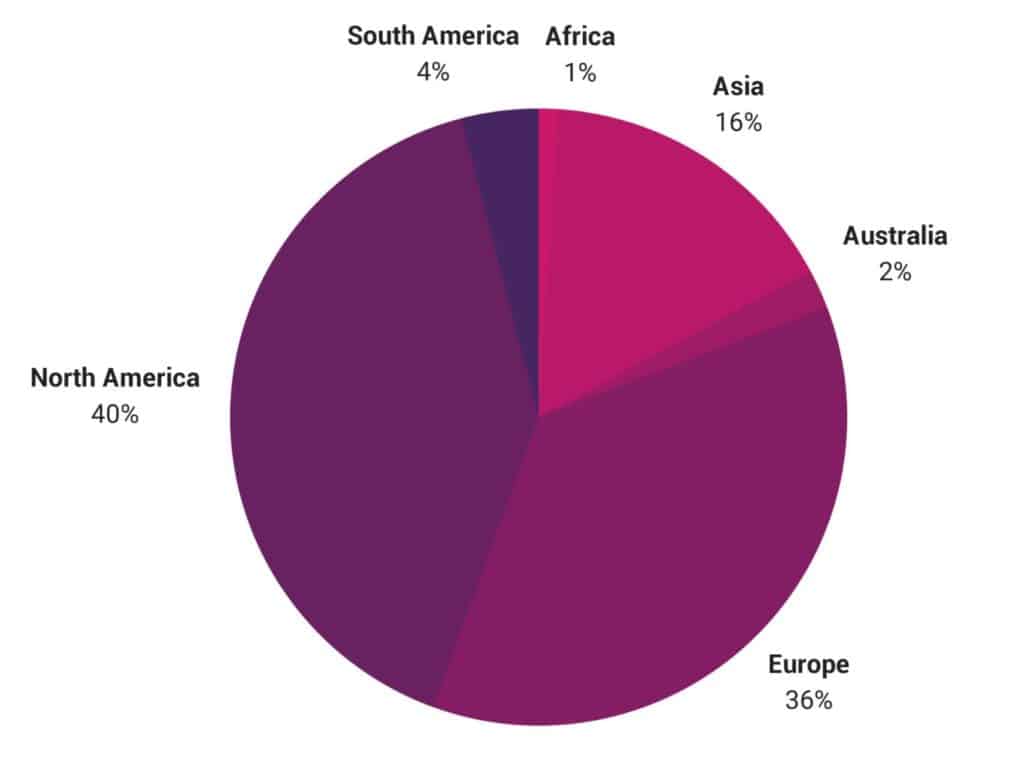 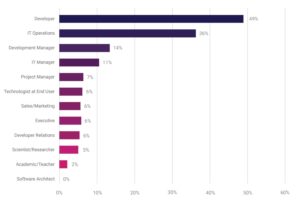 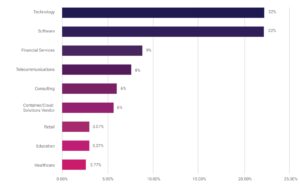 The changing landscape of application development

In this most recent version of the survey, we’ve added additional questions on releases to learn more about how companies are managing their software development cycles. One of the benefits of microservices architectures is the ability for flexible deployments, allowing companies to cut releases as often as they need. Prior to microservices, typical release cycles happened much less often, typically once or twice a year. Responses highlighted this with the breakdown of respondents’ release cycles fairly evenly spread out:

What are your release cycles? 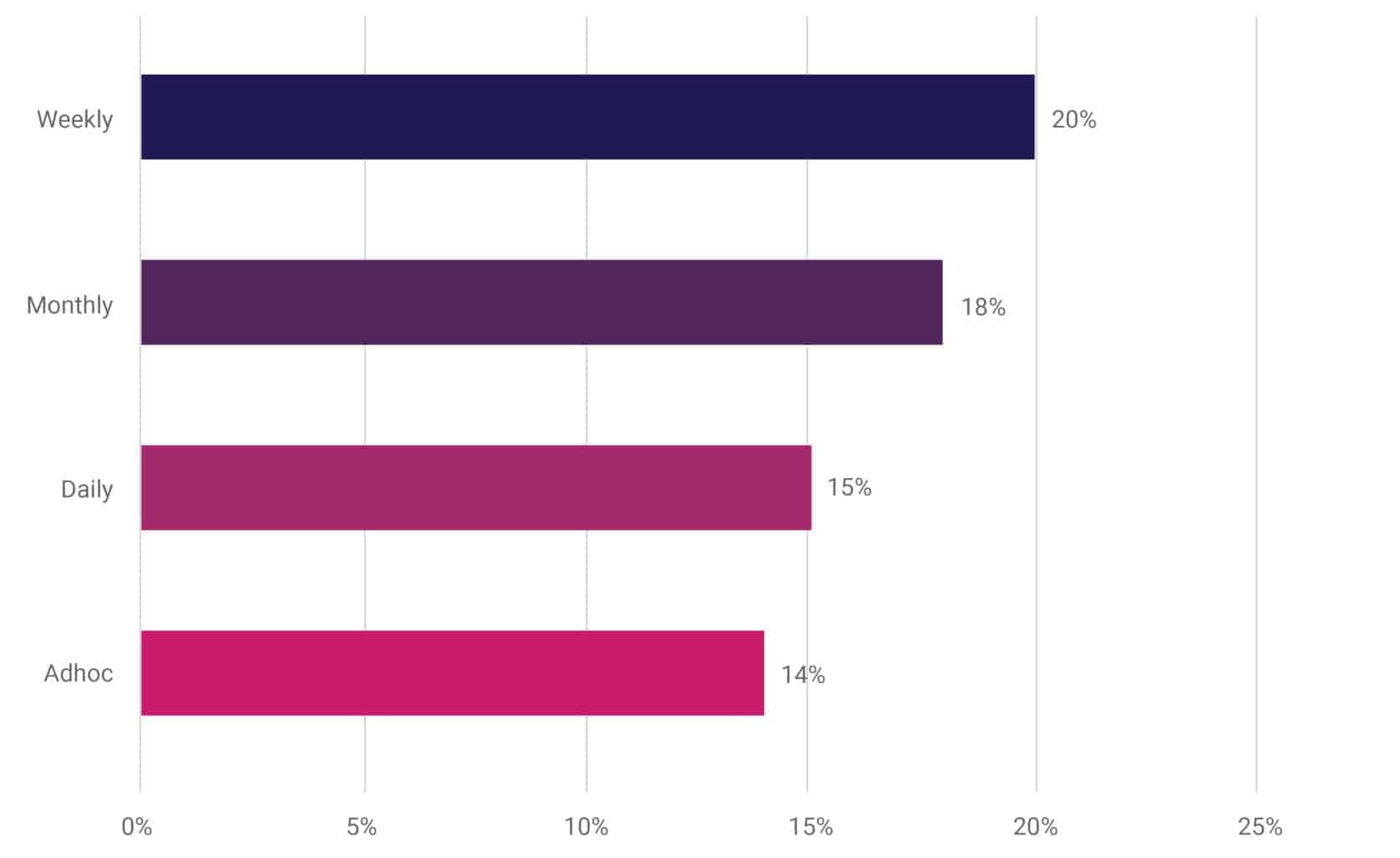 The majority of these releases are automated (42%), with 25% of respondents using a hybrid release method and 27% doing manual releases. As automated releases grow, so does the popularity of tools to manage CI/CD pipelines with Jenkins as the leading tool (70%) followed by Terraform (27%) and Custom Scripts (26%).

Are release cycles manual or automated? 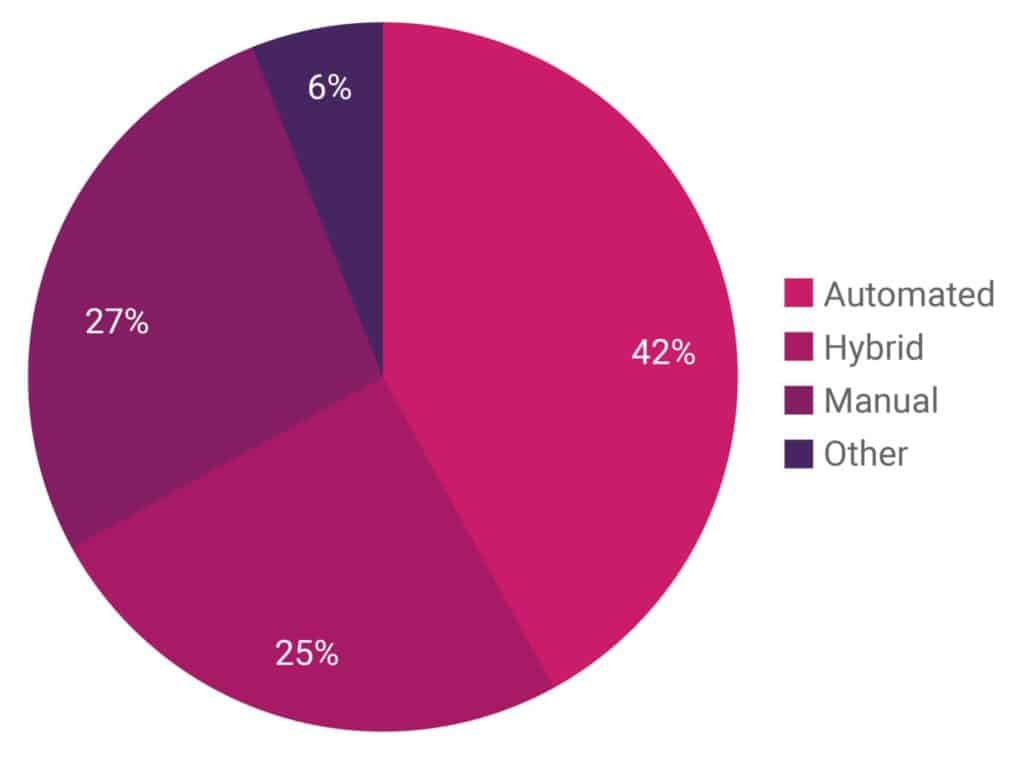 On average, how many machines are in your fleet? 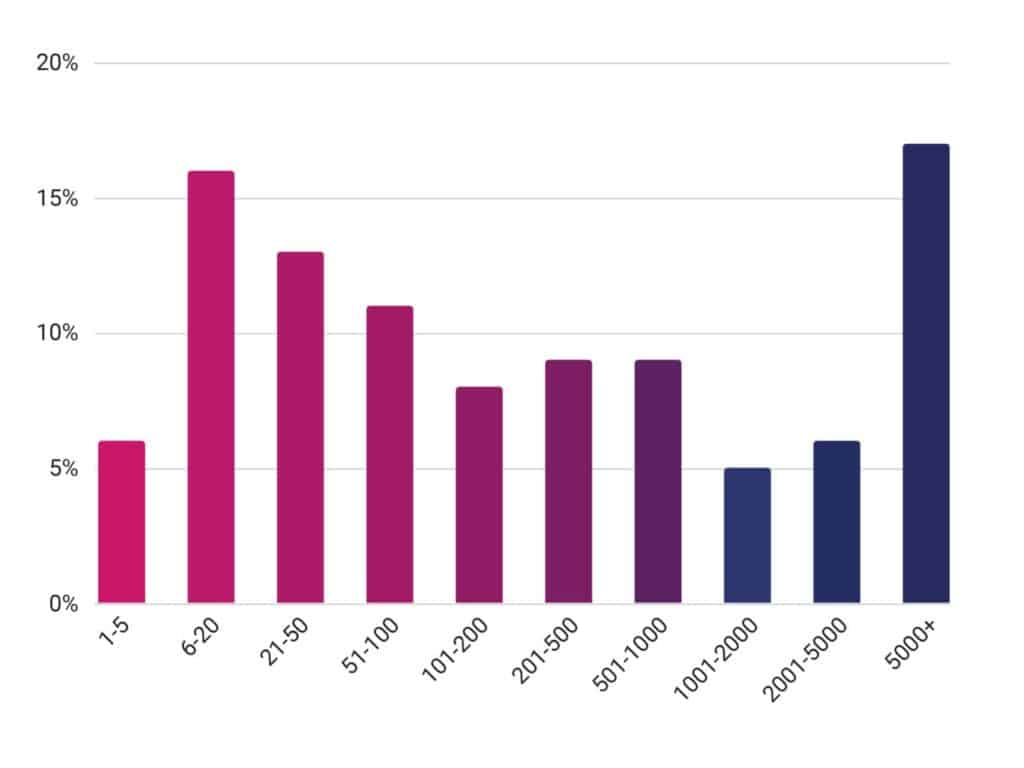 Which of the following data center types does your company/organization use? 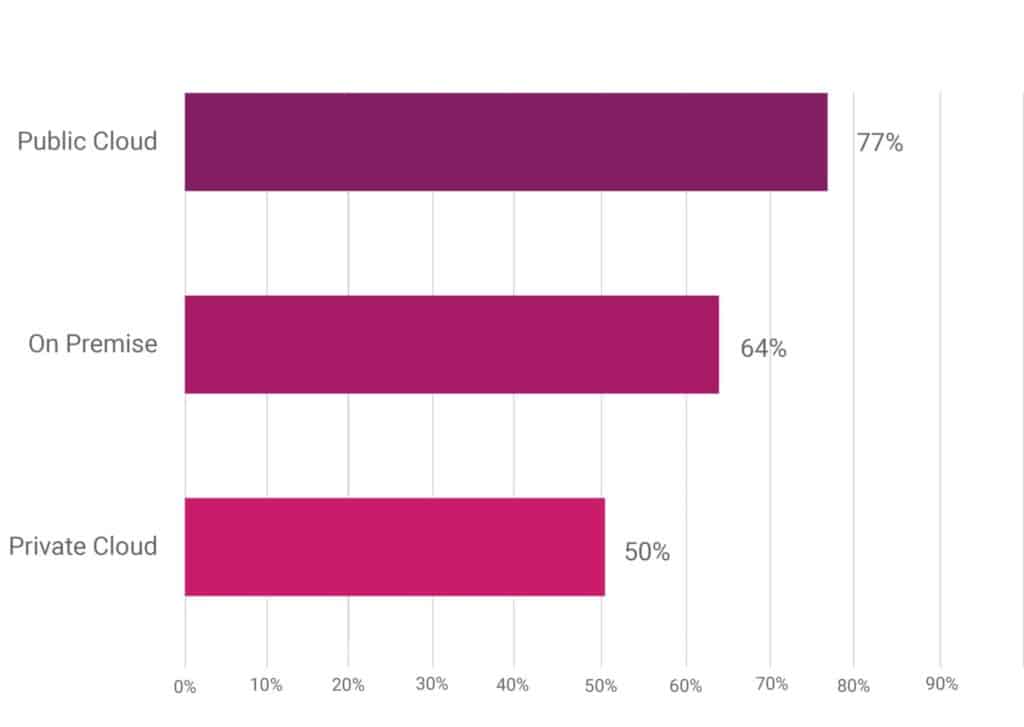 Your company/organization deploys containers to which of the following environments? 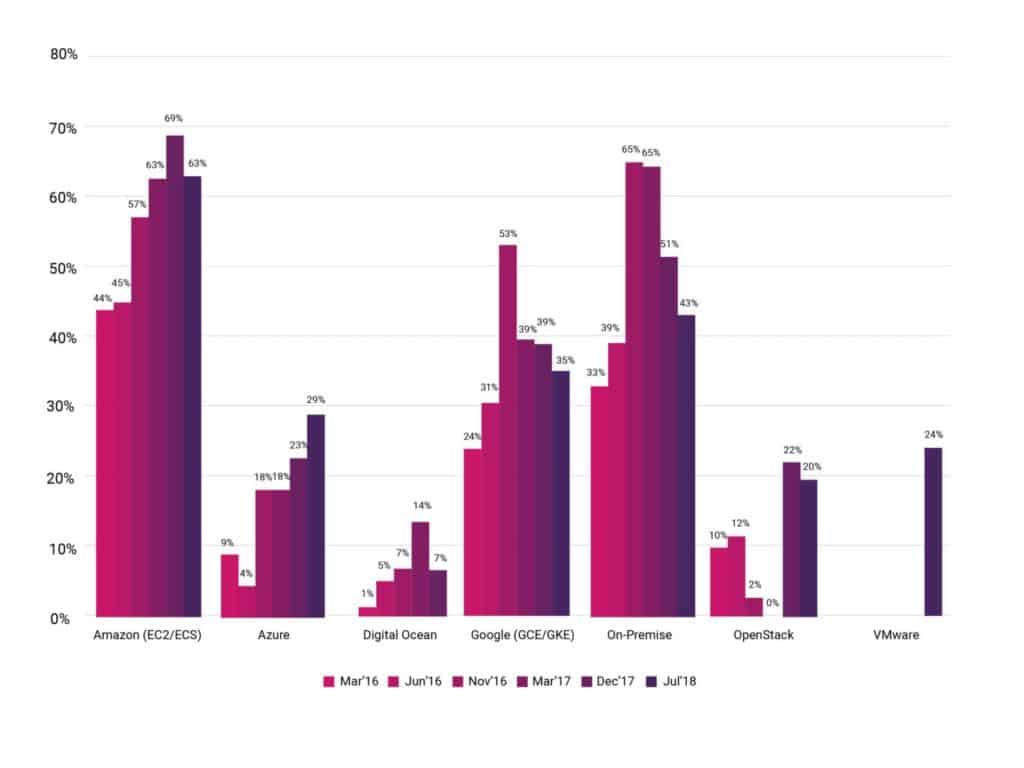 These numbers continue to be inline with the trends we’ve seen over the past year, with two notable changes. On-premise use is down from 51% in December 2017 to 43%, most likely due to growing use of private clouds. Secondly, this is the first time we’ve seen extensive use of VMware in these survey results, with only 1.2% of people citing usage in the December 2017 survey.

Your company/organization uses containers for: 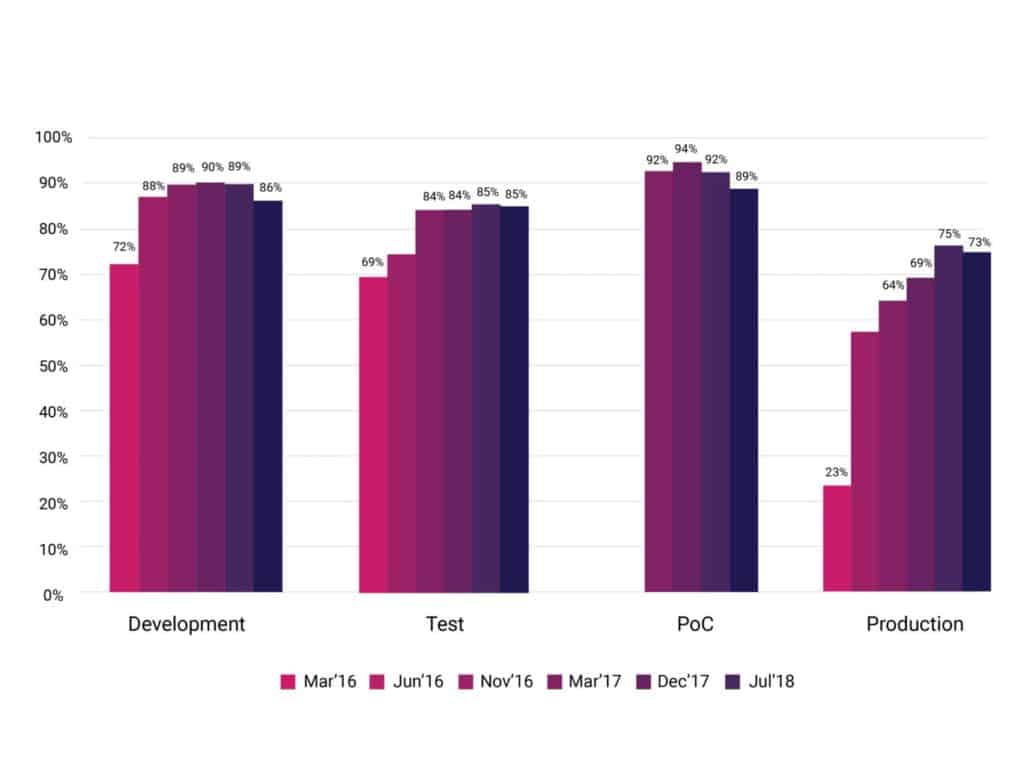 How many containers does your company/organization typically run? 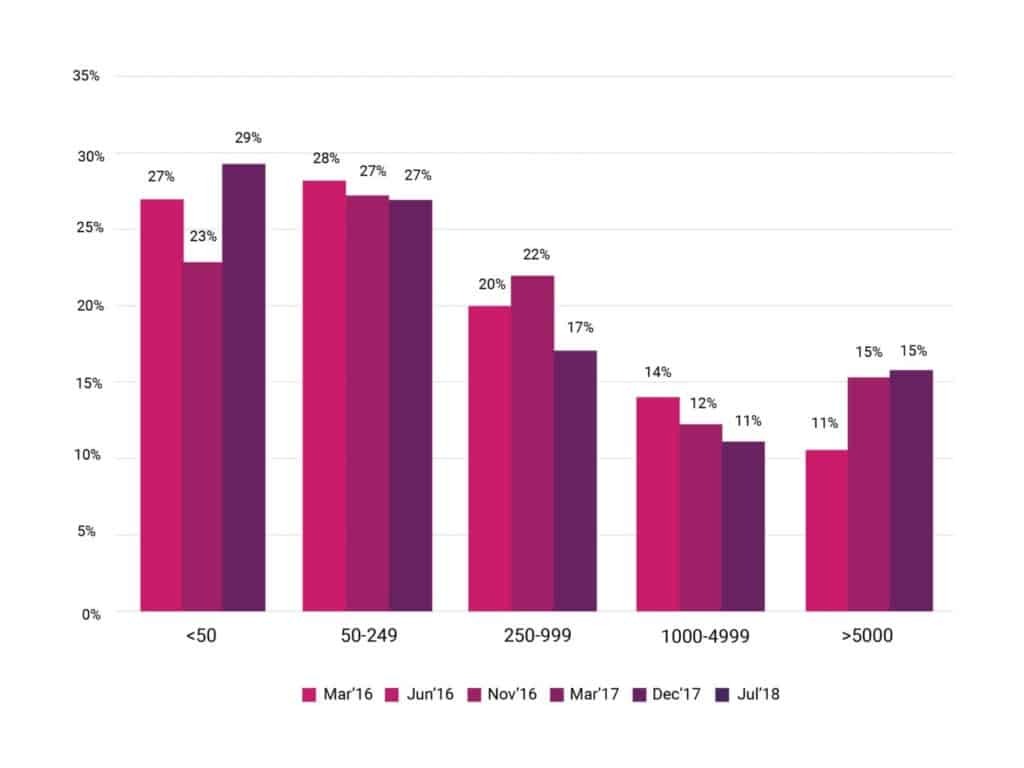 Your company/organization manages containers with: 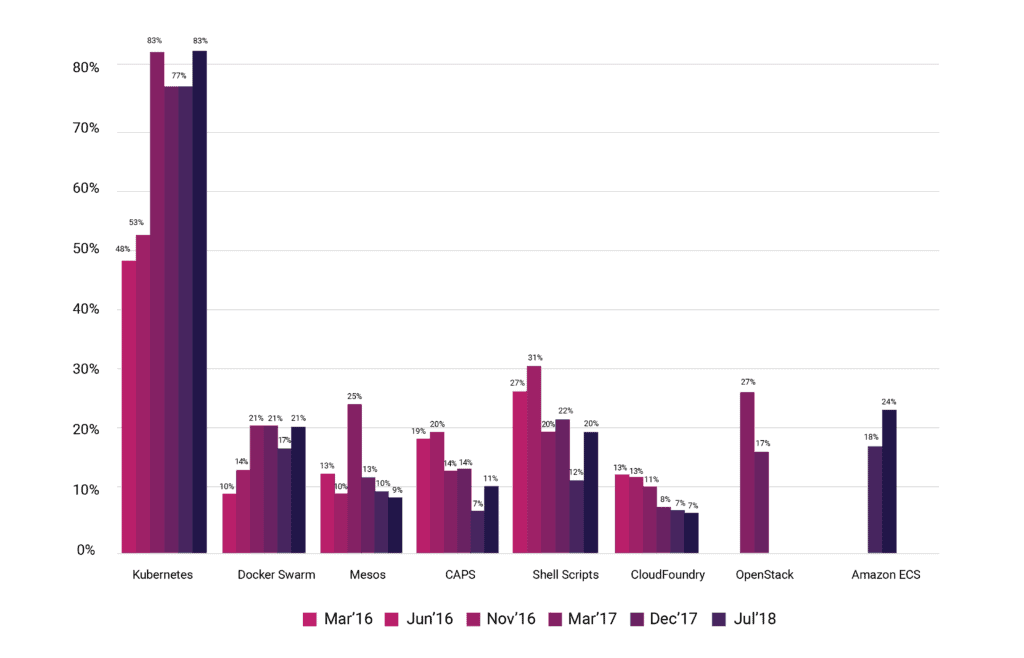 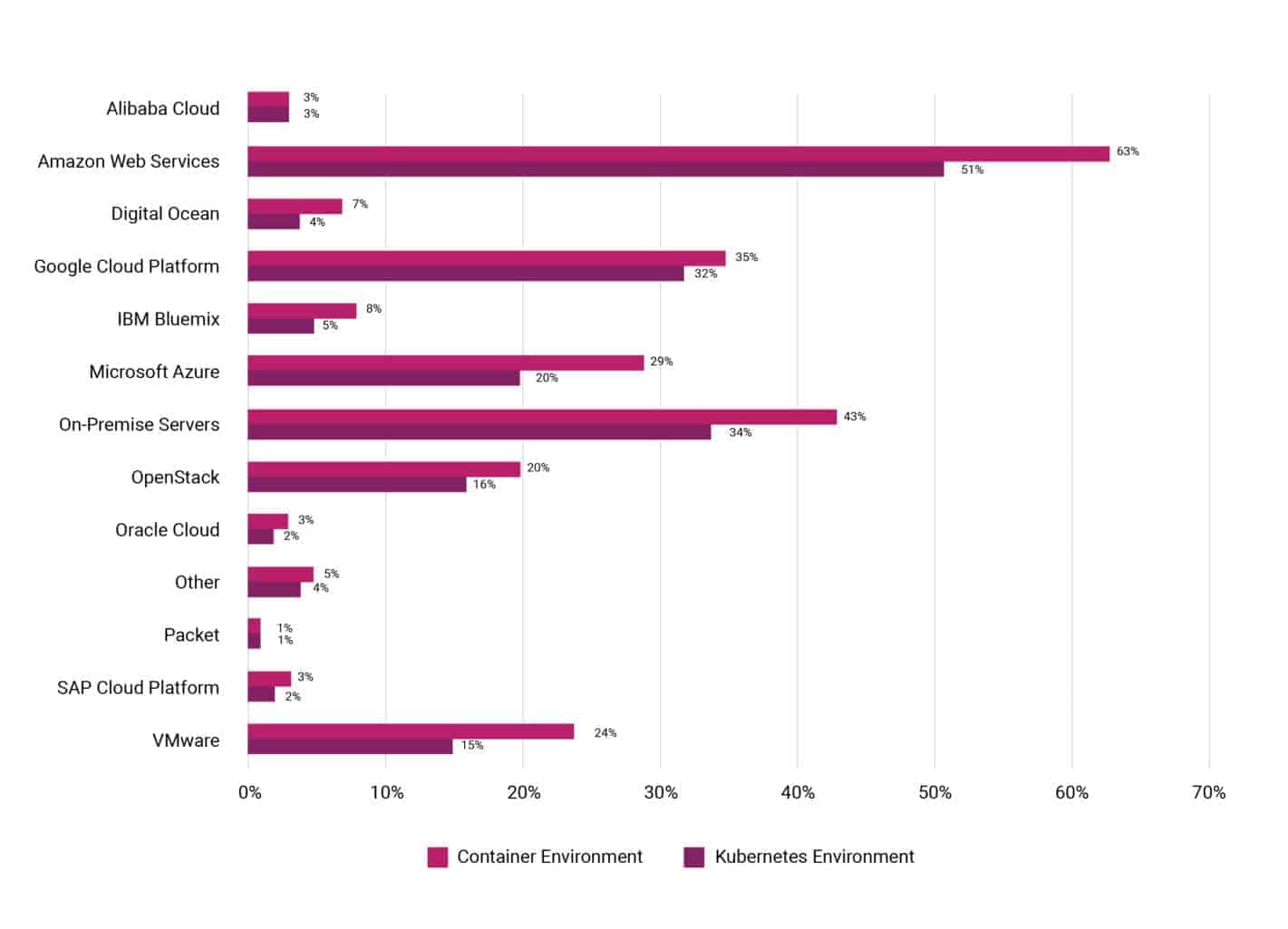 For local development, the majority of respondents are targeting environments such as Minikube (45%), Docker Kubernetes (39%), and on prem Kubernetes installations (30%).

We also asked respondents about the tools they are using to manage various aspects of their applications:

Packaging
The preferred method for packaging is Helm (68%) followed by managed Kubernetes offerings (19%).

Autoscaling
The majority of respondents are autoscaling stateless applications (64%), followed by Java applications (45%), and task/queue processing applications (37%). Those who are not using autoscaling were either not aware of the functionality (21%) or do not want to autoscale their workloads at this time (31%).

Exposing cluster external services
The number one way respondents are exposing Cluster External Services like internet or other VMs is through load-balancer services (67%). This is followed by L7 ingress (39%) and integration with 3rd-party load-balancer (33%).

What are the benefits of cloud native projects? Respondents cited the top three reasons as:

As for the cloud native projects that are being used in production and evaluated: 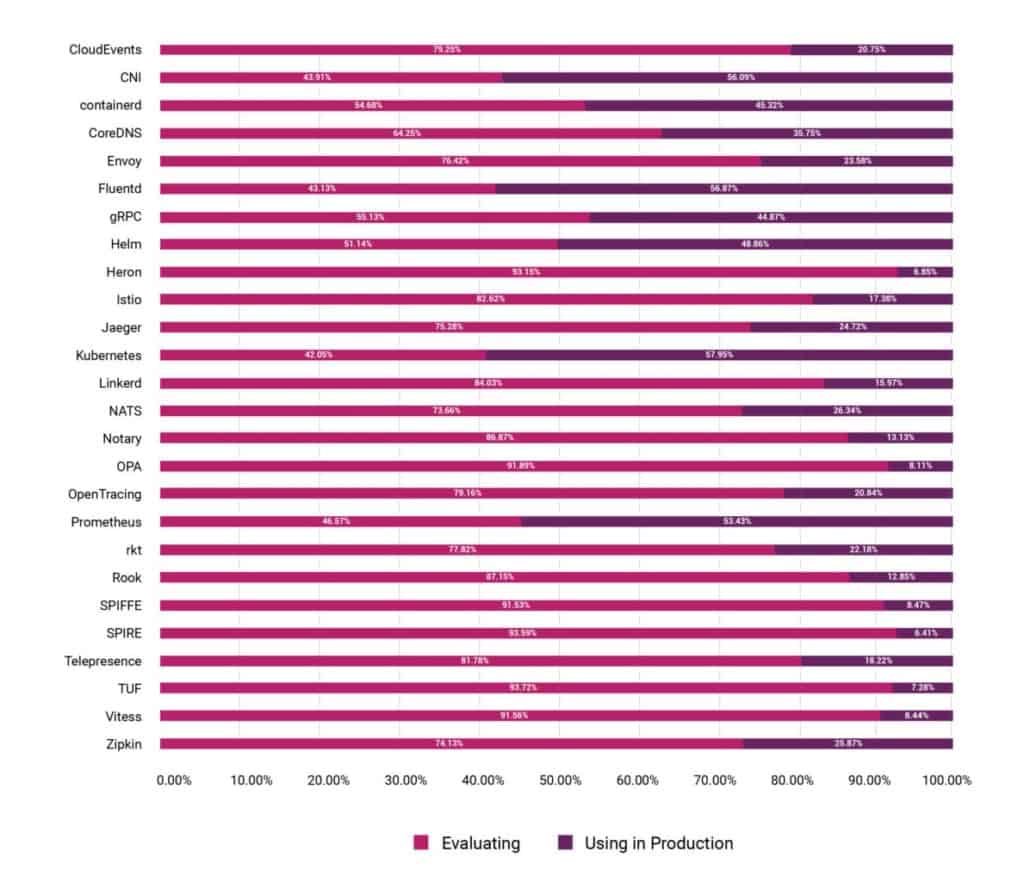 As cloud native technologies change the way companies are designing and building applications, challenges are inevitable. The top challenges that respondents face are:

There are two notable changes to these top challenges. While this is the first time we explicitly asked about cultural changes with the development team, it was cited as the number one challenge in using and deploying containers. Second, lack of training is a new addition to the survey. While CNCF has invested heavily in Kubernetes training over the past year including both free and paid courses and certification for Kubernetes Administrators and Application Developers, we continue to host new projects that need additional training resources as they grow.

The remainder of top challenges have been consistent over our past surveys, but the percentages are continuing to drop as more resources and tools are added to solve these problems.

What are your challenges in using / deploying containers:

Also interesting is the decrease in storage and networking as a challenge alongside the growth of cloud native storage projects such as:

Which of these cloud native storage projects is your company / organization using: 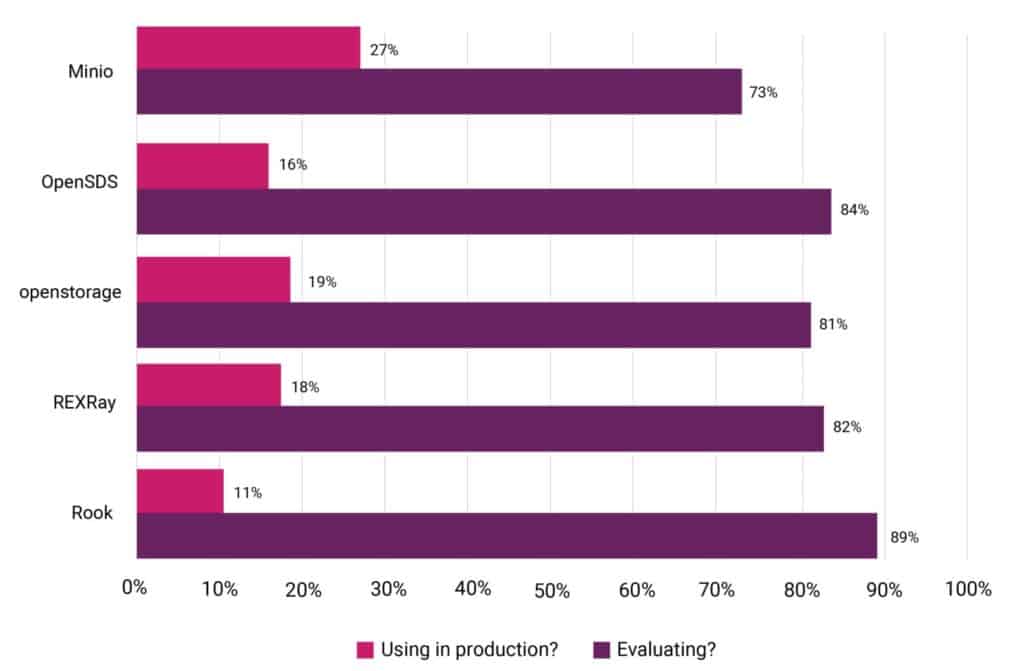 Which installable serverless platforms does your organization use? 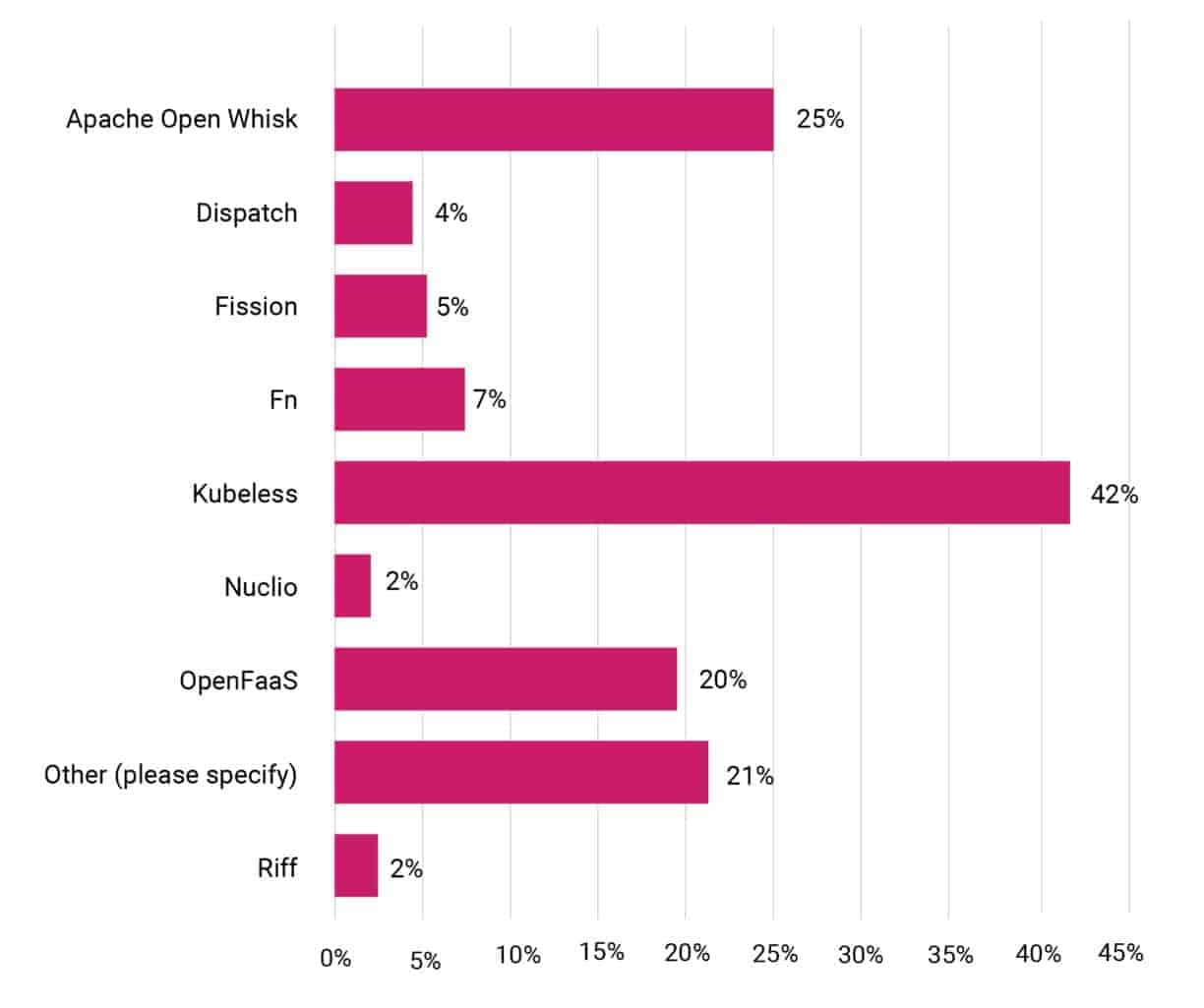 Which hosted serverless platforms does your organization use? 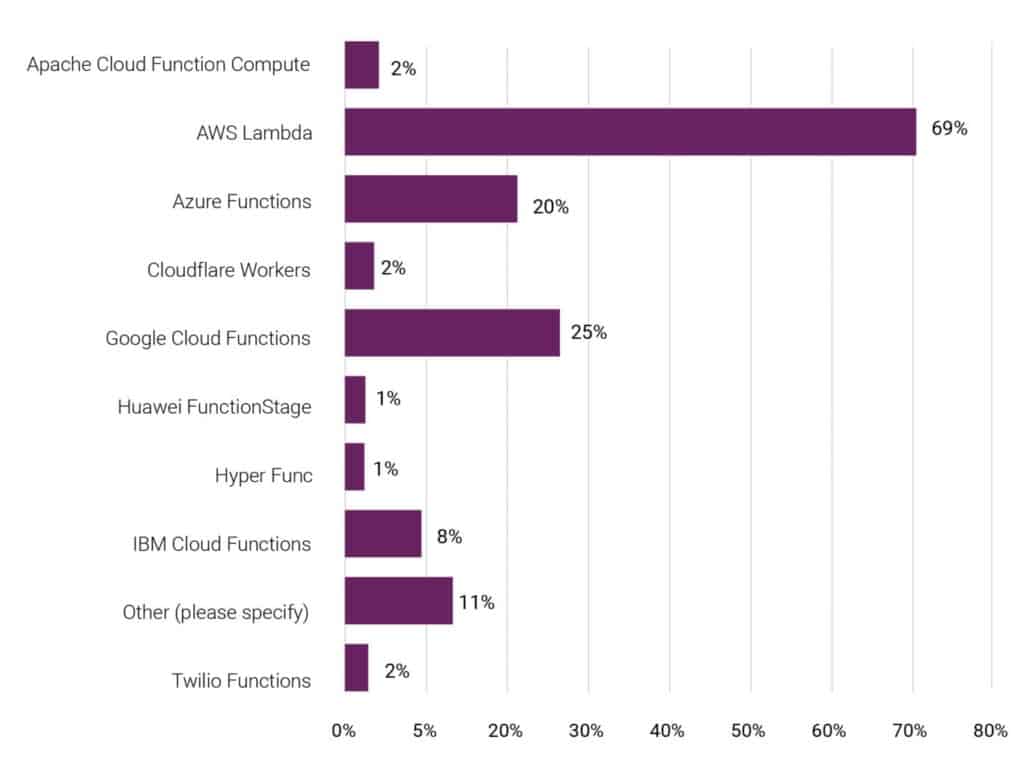 As usage of serverless grew, there is also significant interest in the serverless project CloudEvents with 80% of respondents evaluating the project for us and 21% using it in production. CloudEvents is an effort organized by CNCF’s Serverless Working Group to create a specification for describing event data in a common way.

How to learn more?

20% of respondents use documentation to learn about cloud native projects, the number one resource cited in this survey. For example, SIG-Docs helps maintains an extensive resource of detailed Kubernetes documentation. This includes everything from how to get started with a specific feature to best ways to get involved as a contributor. Each CNCF project hosts extensive documentation on their websites, which can be found here.

12% of respondents attend KubeCon + CloudNativeCon to learn more about the technologies they’re using. KubeCon + CloudNativeCon gathers all CNCF projects under one roof and brings together leading technologists from open source cloud native communities to further the advancement of cloud native computing. The event happens three times per year in Europe, China, and North America.

12% of respondents visit the CNCF website and attend webinars to get more information. CNCF.io is the main resource for all cloud native projects, housing information on a variety of subjects including upcoming events, training, certification, blog posts, and more.

The CNCF Webinar Series takes place every Tuesday from 10am-11am PT. You can see the upcoming schedule and view recordings and slides of previous webinars.

11% of respondents attend meetups and local events to learn about cloud native technologies. CNCF hosts 149 meetups under our umbrella across 33 countries with over 76,000 members. You can find your local meetup here.

CNCF and the local cloud native communities support events all over the world, from conferences to roadshows. You can view upcoming events here.

10% of respondents get their information from Twitter. CNCF tweets out project, community, and foundation news from our Twitter handle. You can also follow your favorite cloud native projects, a list of their Twitter handles (and additional social accounts) can be found here.

How do you learn about cloud native technologies? 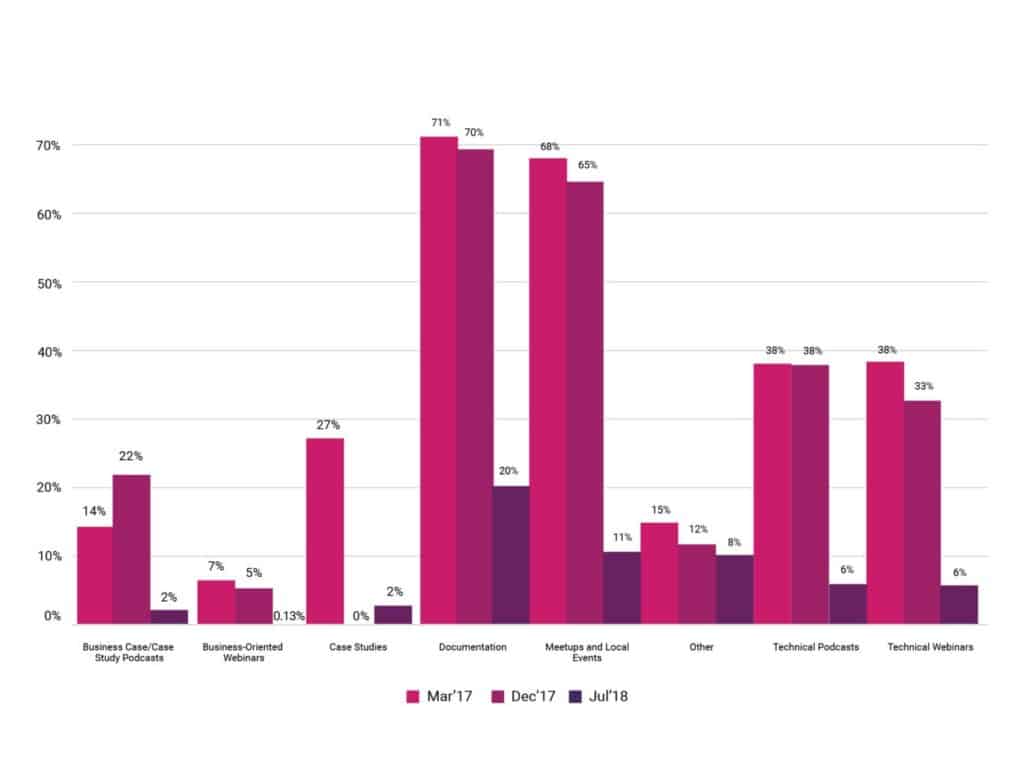 Stay tuned for our follow-up to this survey with results from our Chinese survey coming out later this year!

You can also view the findings from past surveys here: