With KubeCon now behind us, here’s a snapshot of what was accomplished at our most jam-packed show to date. KubeCon + CloudNativeCon Europe 2018 had the largest attendance of any past CNCF event with more than 4,300 contributors, end users, vendors and developers from around the world gathering for over three days in Copenhagen, Denmark to further the education and adoption of cloud native computing, and share insights around this fast growing ecosystem.

Somehow the crowd at #KubeCon is simply stunning… pic.twitter.com/MMzXgfSARg

The annual European event grew by three times last year’s event in Berlin. It was incredible to see the growth of contributors and projects vying to be part of the community. But most impressively was the growth in the End-User Community, which is now at 52, and spans across a number of industries including finance, healthcare, automotive, technology, government, insurance and more.

End user community growth in @CloudNativeFdn demonstrates this is more than a vendor party. #Kubecon pic.twitter.com/BJB2hujrcR

However, even with the massive growth in the End-User Community, it was apparent walking through the expo hall and overhearing conversations and the excitement about new projects that weren’t around just a little while ago, a sea of laptops covered in stickers and not a suit in site, that this is still very much a developer conference.

This pretty much sums up #KubeCon #CloudNativeCon pic.twitter.com/cvGrvd4r8s

Once again, the conference co-chairs, Liz Rice and Kelsey Hightower, rocked the house in every way possible, from rockstar-level keynotes to curating an amazing list of speakers from companies like Adidas, Booking.com, Checkfront, eBay, Lyft, New York Times, Norwegian Tax Administration, Spotify and The Financial Times, covering emerging trends around serverless, hardware hacking, service mesh, machine learning and APIs of the future. They were essential in keeping this a true developer conference.

Wow! What a talk by @swardley! Coming to #KubeCon was worth it just for this one https://t.co/rfaIU660Sw

I’ve walked past @monkchips, @jbeda, @garethr (who spoke to me – don’t worry I played it cool), @kelseyhightower, @adrianco and I’m sure I saw @swardley! Well done #kubeCon for such a great list of folks.

Your goal for today at #KubeCon : say hi to someone new! https://t.co/1d6Fj15Rzm

Best and biggest #KubeCon yet.

The CNCF #Serverless Working Group has grown massively over the last year. Enjoying the BoF session at #CloudNativeCon #KubeCon Awesome to see so many companies working together. pic.twitter.com/hoI7nq45gw

While education and collaboration are vital to the future of the cloud native ecosystem, it is imperative to CNCF’s success that everyone in the community that wants to participate feels welcome to do so regardless of gender, sexual orientation, disability, race, ethnicity, age, religion or economic status.

We also partnered with Google and Heptio to host a diversity luncheon & program with engaging discussions focused on how to recruit more women + underrepresented groups into tech, the role of mentors and perceived gender biases around soft and hard skills in the workplace. 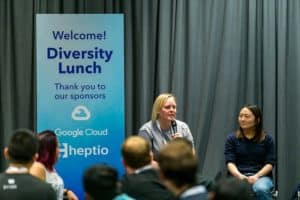 The May 1st EmpowHer Evening Event, sponsored by Google Cloud, gathered attendees to discuss ways to increase inclusivity in our fast-growing ecosystem, how to get involved with different cloud native projects, and network with others in the tech industry from around the globe.

Excellent discussion earlier today on the issue of diversity in our industry. Big kudos to @kubeconio, @heptio and @Google for this effort. Now we need to walk the walk. #KubeCon pic.twitter.com/fTz9prJK6h

[LIVE from #KubeCon + #CloudNativeCon EU] the #Diversity Luncheon is packed + the panel is tackling questions on inclusion, equal opportunity & getting your stories heard â€â™€ï¸ â€â™‚ï¸ special thanks to sponsors @googlecloud & @heptio! pic.twitter.com/8HKgrcK1RQ

Here is the video of my talk at #KubeCon. Thanks to @CloudNativeFdn for putting on a fantastic conference. The diversity luncheon was a personal highlight. Like @Ana_M_Medina says: we need to make a culture where we all belong so it never feels like we are one of kind. https://t.co/GhLRGf7O2I

As mentioned earlier, the growth of the End-User Community has been tremendous and we can proudly say that CNCF has one of the largest end-user community membership of any open source foundation.

Members of the CNCF End-User Community have an official voice and the ability to help shape the future of the ecosystem. To recognize this rapidly growing community, we announced the first ever Top End-User Award. The recipient, Bloomberg, was chosen by its peers in recognition of major contributions to the cloud native ecosystem

Favorite part of the keynote – end user awards; @cra presenting it to the first such recipient – @TechAtBloomberg, congratulations! #KubeCon pic.twitter.com/DIa0eNaerT

KubeCon was the center of a lot of exciting news being announced from the end-user, vendor and project communities, but we’d be remiss not to highlight some of the major technical announcements from the community, which help advance all projects and companies in the cloud native ecosystem.

To much excitement, the CNCF Serverless Working Group released version 0.1 of CloudEvents, which is an industry-wide project designed to ease serverless event and tooling interoperability. It’s expected to be proposed as a CNCF sandbox project in May.

Announced today and demo’d at #kubecon, first-class support for #CloudEvents on @Azure Event Grid. Thanks to @CloudNativeFdn for the great partnership!

Open CloudEvents are the glue of the serverless world!https://t.co/ariMe043n5 pic.twitter.com/FheC31kl8C

Also, Google Cloud announced Stackdriver for Kubernetes monitoring, which will be available in production sometime in version Kubernetes 1.10. Google Cloud also announced it will be open sourcing gVisor, a sanboxed container runtime.

All Attendee Party at Tivoli Gardens

We’re also proud to say that our events team out did themselves with one of the all-time best All Attendee Party at the beautiful Tivoli Gardens. We ate. We drank. We continued conversations about Cloud Native, and some of us even went on rides!

TFW, as a virtual kubelet, you realize your node affinity rules won’t give you a chance to run the same workloads as the big kubelets. #kubecon #CloudNativeCon pic.twitter.com/lzFGzGPQaq

All work and no play makes Jack a dull #Cloud. Hats off to @CloudNativeFdn for an awesome night at the #KubeCon #CloudNativeCon all-attendee party at #TivoliGardens. pic.twitter.com/5H2khjVPUK

“Last week at KubeCon and CloudNativeCon in Copenhagen, we saw an open source community coming together, full of vim and vigor and radiating positive energy as it recognized its growing clout in the enterprise world.

The hotel and conference center were buzzing with conversation. Every corner and hallway, every bar stool in the hotel’s open lobby bar, at breakfast in the large breakfast room, by the many coffee machines scattered throughout the venue, and even throughout the city, people chatted, debated and discussed Kubernetes and the energy was palpable.” Ron Miller, TechCrunch

“That optimism was on display this week at the latest edition of a conference called KubeCon + CloudNativeCon Europe 2018 in Copenhagen, Denmark. The event drewâ€¦ 4,300 other attendees from around the world.

CNCF says it now has 20 projects – including Kubernetes – in some stage of development. Just as critically, CNCF now counts every major cloud service provider as a member. Over the past 12 months, Dan Kohn, executive director of CNCF, said he has been surprised by how quickly industry partners, many of them cloud platform rivals, have bought into the movement and joined the foundation.” Chris O’Brien, VentureBeat

“Today, the furor over Kubernetes (and containers, generally) is loud, and rightly so: Containers mark a demonstrably better way to build applications, with Kubernetes the runaway leader for making it easy to manage those containers at scale.” Matt Assay, TechRepublic

“”I do think Kubernetes in particular has driven a level of consistency across the industry that we’ve never seen,” [Jason] McGee [CTO, IBM Cloud Platform]. “You literally can go to any public cloud now and all the on-premises environments and have a pretty high success rate at taking a workload and running it in another place.

While the workload movement that Kubernetes enables is not a live migration, that’s not necessarily what every organization needs or wants. What Kubernetes and the container ecosystem provide is a standard application packaging approach, though other things are still needed to fully enable portability, according to McGee.” Sean Kerner, eWeek

Kudos @timothysc. This is why I like so much this community. User centric. #kubeCon pic.twitter.com/ccAp5XCR0l

The CNCF #Serverless Working Group has grown massively over the last year. Enjoying the BoF session at #CloudNativeCon #KubeCon Awesome to see so many companies working together. pic.twitter.com/hoI7nq45gw

Now @monadic talking about building the next phase of @CloudNativeFdn #CloudPlatform for end users! #Componentisation pic.twitter.com/P36xtU9v8z

Best warm-fuzzy-feeling in a while: CERN say that #kubernetes makes their lives easier and helps them focus on the physics.

Dave Zolotusky talking about how accessible leaders in the @CloudNativeFdn community are.

It’s a wrap. Thanks @CloudNativeFdn for a great #kubecon. Great talks and discussion. A new era of cloud computing is starting here. pic.twitter.com/jQoDdnQNOD

completely humbled with how much the @CloudNativeFdn has grown, hope you enjoyed #kubecon #cloudnativecon and please feel free to personally send me feedback on how we can make things better for you in the future