Welcome to the 2017 Cloud Native Computing Foundation annual report. Comments and feedback are welcome at info@cncf.io.

It’s amazing to look back at the contributions that the cloud native community made last year. We started 2017 with 63 members and 4 projects (Kubernetes, Prometheus, Fluentd, and OpenTracing).

We offer multiple opportunities for end users to contribute and have their voices heard. Companies that use cloud native technologies internally, but do not sell any cloud native services externally, are eligible to join the end user community. Our end user community is growing and we finished 2017 with 32 top companies and startups that are committed to accelerating the adoption of cloud native technologies and improving the deployment experience. Also in 2017 the End User Community elected Sam Lambert of GitHub to the CNCF Technical Oversight Committee (TOC) to represent their interests.

32 Companies in the End User Community

To better listen to our community, we conducted a survey to learn more about the state of Kubernetes’ deployments and other container management platforms, as well the progress of container deployment in general. More than 550 community members responded. The future of cloud-native is exciting, with more than 93% of respondents recommending CNCF technologies.

2017 was very busy in terms of project activity. Many milestone releases demonstrated steady forward progress for each of these projects. Highlights include the addition of 10 new projects (listed in order of date accepted) accepted by the CNCF TOC:

The communities working on CNCF projects continue to be active. In fact, 6 projects reached their 1.0 milestone in 2017, and Prometheus reached 2.0, with significant performance improvements.

CNCF has a thriving technical community, with oversight provided by its TOC. In 2017, the TOC created the following working groups to investigate and evaluate approaches for the following topics:

KubeCon + CloudNativeCon North America, held December 6-8, 2017 in Austin, was a major success with record-breaking registrations, attendance, sponsorships, and co-located events. The event generated 4,212 registrations with an unusually high 97% attending. Audience engagement was incredibly high with 1,101 companies participating from 51 countries across 6 continents and representation from 133 CNCF members and 968 ecosystem companies.

Co-chairs, Kelsey Hightower of Google, and Michelle Noorali of Microsoft led a program committee of more than 50 to carefully curate the content. Keynote speakers included Clayton Coleman of Red Hat, Jesse Newland of GitHub, Sarah Novotny and Brian Grant of Google, and Zihao Yu and Ilya Chekrygin of HBO.

Sponsor count for KubeCon + CloudNativeCon in December more than doubled to 106 in 2017 compared to 40 the previous year. 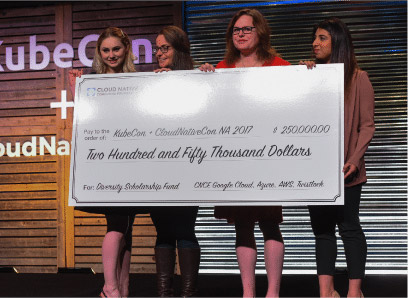 Part of supporting the continued development of this amazing community is making sure that everyone who wants to participate feels welcome to do so regardless of gender, gender identity, sexual orientation, disability, race, ethnicity, age, religion, or economic status. Education, inclusion, and collaboration are vital to the future of the cloud native ecosystem. To increase and encourage multiple perspectives, and with extraordinary contributions from Google Cloud and Microsoft Azure, CNCF was able to provide $250,000 in diversity scholarships, an unprecedented investment in increasing the diversity of a tech conference. With additional contributions from AWS and Twistlock, CNCF was able to provide 103 diversity scholarships. We are a community of open source projects, including Kubernetes, Envoy, and Prometheus. Kubernetes and other CNCF projects are some of the highest velocity projects in the history of open source.

With large open source projects, it is important to recognize essential contributors who complete the myriad community building tasks. That is why CNCF created the Chop Wood/Carry Water awards.

Adopting new technology can be challenging, especially when it’s hard to find qualified people. CNCF offers training and certification for key CNCF technologies like Kubernetes to ensure that organizations can train their own employees or hire from a strong body of experienced talent. In July 2017, we announced the free Kubernetes Massively Open Online Course (MOOC), self-paced and instructor-led Kubernetes training, through our partnership with edX.

In September 2017, we offered the official Certified Kubernetes Administrator certification to ensure a high level of expertise in the ecosystem. Kubernetes Certified Service Provider (KCSP) program is a pre-qualified tier of vetted service providers that offer Kubernetes support, consulting, professional services, and training for organizations embarking on their Kubernetes journey. The KCSP program ensures enterprises get the support needed to roll out new applications faster and more efficiently than before, while feeling secure that there’s a trusted and vetted partner available to support their production and operational needs.

It is nearly unprecedented to get every cloud company, enterprise software provider, and startup in the industry to support a conformance program. It is an extraordinary accomplishment that there are no forks in our industry, which speaks to the commitment that companies of all sizes have made to be good partners in the community.

The community response was overwhelming; CNCF has certified offerings from 44 vendors.

CNCF will continue to build sustainable ecosystems and foster a community around a constellation of high quality projects that orchestrate containers as part of a microservices architecture. We hope you will join us on our mission in 2018. Learn more at www.cncf.io .