Prometheus is one of the standard-bearing open-source solutions for monitoring and observability. From its humble origins at SoundCloud in 2012, Prometheus quickly garnered widespread adoption and later became one of the first CNCF projects and just the second to graduate (after Kubernetes). It’s used by tons of forward-thinking companies in production, including heavyweights like DigitalOcean, Fastly, and Weaveworks, and has its own dedicated yearly conference, PromCon.

Prometheus has succeeded in part because the core Prometheus server and its various complements, such as Alertmanager, Grafana, and the exporter ecosystem, form a compelling end-to-end solution to a crucial but difficult problem. Prometheus does not, however, provide some of the capabilities that you’d expect from a full-fledged “as-a-Service” platform, such as multi-tenancy, authentication and authorization, and built-in long-term storage.

Cortex, which joined the CNCF in September as a sandbox project, is an open-source Prometheus-as-a-Service platform that seeks to fill those gaps and to thereby provide a complete, secure, multi-tenant Prometheus experience. I’ll say a lot about Cortex further down; first, let’s take a brief excursion into the more familiar world of Prometheus to get our bearings.

As a CNCF developer advocate, I’ve had the opportunity to become closely acquainted both with the Prometheus community and with Prometheus as a tool (mostly working on docs and the Prometheus Playground). Its great success is really no surprise to me for a variety of reasons:

Early on, Prometheus’ core engineers made the wise decision to keep Prometheus lean and composable. From the get-go, Prometheus was designed to do a small set of things very well and to work seamlessly in conjunction with other, optional components (rather than overburdening Prometheus with an ever-growing array of hard-coded features and integrations). Here are some things that Prometheus was not meant to provide:

As a Prometheus-as-a-Service platform, Cortex fills in all of these crucial gaps with aplomb and thus provides a complete out-of-the-box solution for even the most demanding monitoring and observability use cases.

The architecture of Cortex

Cortex has a fundamentally service-based design, with its essential functions split up into single-purpose components that can be independently scaled:

Each of these components can be managed independently, which is key to Cortex’s scalability and operations story. You can see a basic diagram of Cortex and the systems it interacts with below: 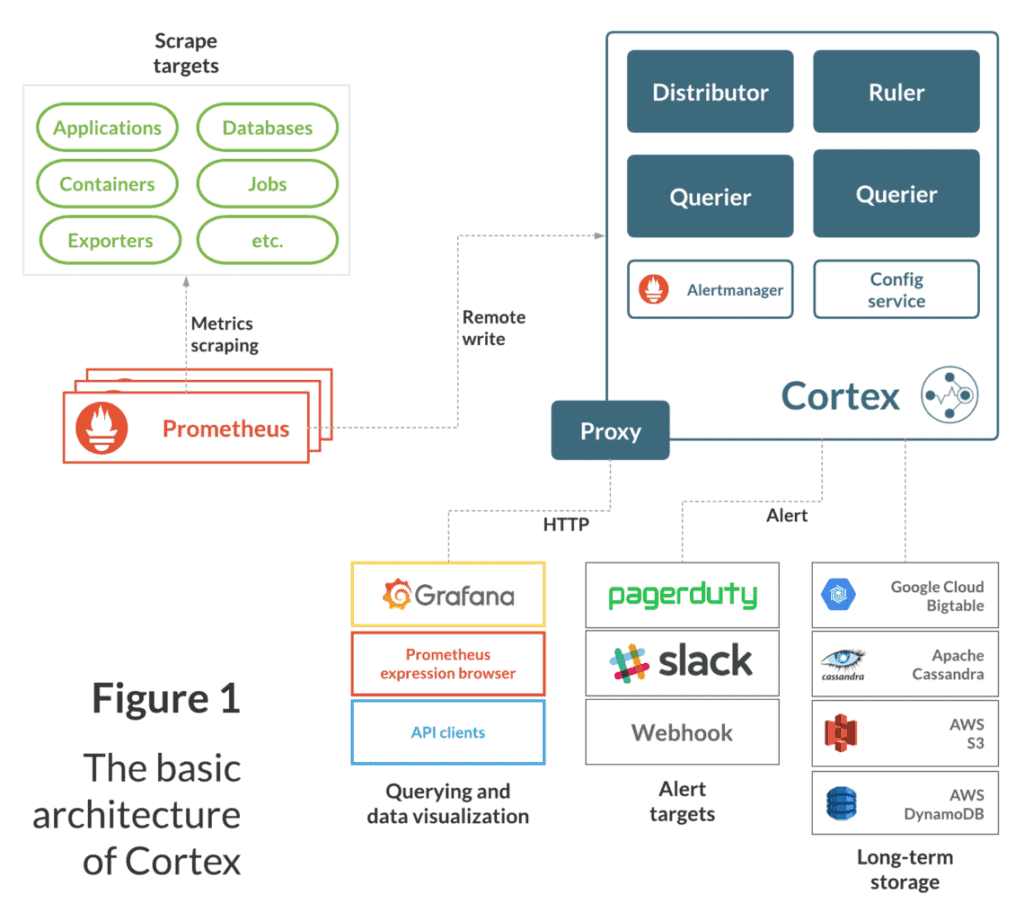 As the diagram shows, Cortex “completes” the Prometheus Monitoring System. To adapt it to existing Prometheus installations, you just need to re-configure your Prometheus instances to remote write to your Cortex cluster and Cortex handles the rest.

Single-tenant systems tend to be fine for small use cases and non-production environments, but for large organizations with a plethora of teams, use cases, and environments, those systems become untenable (no pun intended). To meet the exacting requirements of such large organizations, Cortex provides multi-tenancy not as an add-on or a plugin but rather as a first-class capability.

Multi-tenancy is woven into the very fabric of Cortex. All time series data that arrives in Cortex from Prometheus instances is marked as belonging to a specific tenant in the request metadata. From there, that data can only be queried by the same tenant. Alerting is multi-tenant as well, with each tenant able to configure its own alerts using Alertmanager configuration.

In essence, each tenant has its own “view” of the system, its own Prometheus-centric world at its disposal. And if you do use Cortex in a single-tenant fashion, you can expand out to an indefinitely large pool of tenants at any time.

Several years into its development, users of Cortex have tended to cluster into two broad categories:

Cortex, the Prometheus ecosystem, and the CNCF

Cortex has some highly compelling technological bona fides, but under the current industry Zeitgeist I also think it’s important to point out its open source bona fides as well:

With the addition of Cortex to the CNCF sandbox, there are now three Prometheus-related projects under the CNCF umbrella (including Prometheus itself and OpenMetrics). We know that monitoring and observability are essential components of the cloud native paradigm, and we’re happy to see continued convergence around some of the core primitives that have organically emerged from the Prometheus community. The Cortex project is energetically carrying this work forward and I’m excited the Prometheus-as-a-Service offshoot of the Prometheus ecosystem take shape.

<< Previous Post: Closing out 2018 with a top-notch cloud native community event! Next Post: Monitoring Kubernetes, part 1: the challenges + data sources >>
This website uses cookies to offer you a better browsing experienceFind out more about how we use cookies and how you can change your settings