Chris Gaun, Mesosphere, sat down with Kaitlyn Barnard, Cloud Native Computing Foundation (CNCF), to talk about cloud native, trends in the industry, and being an Ambassador. Below is their interview. You can also view the video.

Kaitlyn: Thank you for joining me today to talk about the CNFC Ambassador Program and what you’re doing in the community. Can you start by introducing yourself?

Chris: My name is Chris Gaun. I am a CNCF ambassador and product marketing manager at Mesosphere. 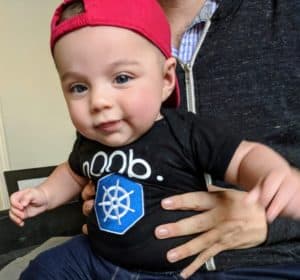 Kaitlyn: I know you have a new baby at home. Five weeks old now. How’s the new dad life treating you?

Kaitlyn: In your experience, what is the biggest challenge for adopting and scaling cloud native applications right now?

Chris: I feel that there’s really great tools out there: open source tools, a lot of them under the CNCF umbrella and some of them not. To piece those together, Prometheus, Kubernetes, Jenkins, or CI/CD pipeline, is still somewhat difficult. There’s a lot of great vendors, cloud providers, giving users a lot of help in this area. But if you’re coming from an old-school, larger organization where most of your experience might be with WebSphere or something of that nature, that approaching this (cloud-native) and saying, “Oh yeah, I’m gonna setup Kubernetes or manage Kubernetes.” Then, “Oh, now I need Prometheus and now I need Linkerd or now I need Istio.” That’s a big project at that point.

Kaitlyn: What cloud native trend are you most excited about?

Chris: Well, first off, this whole thing has been amazing. I have pictures from KubeCon two years ago in London and it was in a co-working space. There there was maybe 500 people coming-and-going, but 150 probably there all the time, eating pizza. So you could feed them on however many boxes of pizza. To see the trajectory of over 4,000 people in a room, it’s just mind boggling from 150 in a basement.

All these tools that are coming out, especially Istio, are amazing. The fact that they’re all open source, people can kick the tires without spending a huge amount of money, and get the knowledge of how to do cloud native infrastructure and cloud native applications without diving in head-first is amazing

Kaitlyn: You’ve actually been part of the CNCF Ambassador Program since the beginning. Can you talk about the early days and why you wanted to be part of the program?

Chris: As background, I’ve been a part of the Kubernetes community for three years, almost since the beginning. I was investigating it very early on before GA. CNCF was created, and then Kubernetes came under its banner.

I thought there should be a safe space where we just talk about Kubernetes and how cool it is, instead of talking about our own vendor politics or selling stuff all the time. I was talking to Chris, the CTO of CNCF at the time, and he said, “I think I’m gonna have this CNCF Ambassador Program. Would you like to be a member?”. Then when the program kicked off, I got an email to be a CNCF Ambassador.

We’re here to promote the CNCF tools, the open source tools, that are under the CNCF banner like Kubernetes and Prometheus without any of the vendor politics. Just talking about how cool the technology is.

Kaitlyn: We’ve talked a lot about work. What do you do when you’re not working?

Chris: Well, now I have a five-week-old, so not a lot right now. Before that – I’m actually from New York, but I recently moved to Mississippi. My wife’s a doctor and she’s in a fellowship. So we spend a lot of time outdoors. Mississippi is a beautiful state. We go on a lot of hikes, we have a nice river nearby called the Mississippi River, and a lake. We try to get out as much as possible. I have a dog named Panda who goes out with us and we go for hikes.

Kaitlyn: That’s awesome. For the record Panda’s one of my favorite dog names up to this point. Thank you so much for taking the time to talk to me today.

Chris: Thanks for having me.