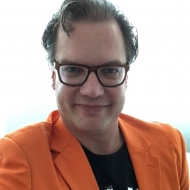 * Lives in Cologne, Germany
* Married, Father of 3
* Studied Physics, finished an MBA
* Built and sold several tech companies since 1996
* Used Gopher when it still made sense and built an Web-Analytics Company end of the 90s.
* Spammed Search Engines before Google became a thing
* Now Co-Founder of Giant Swarm, taking care of Customers and People