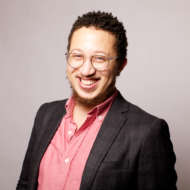 Stephen Augustus is an active leader in the upstream Kubernetes community.
He currently serves as a Special Interest Group Chair (SIG Release, SIG PM), a Release Manager, and a subproject owner for Azure, and a Program Committee member for KubeCon 2019 (Barcelona, Shanghai, and San Diego). He has served on the Kubernetes Release Team for multiple releases, built the Release Team for a few releases, and established the new Release Managers group. When not focused on Kubernetes project governance, Stephen participates in Meet Our Contributors (a monthly series geared towards answering contributor questions), staffs the Release Team, writes blog posts about new enhancements to the ecosystem, chats with media analysts about Kubernetes, and reviews new membership requests for Kubernetes GitHub organizations.

Stephen leads the Cloud Native Developer Strategy team at VMware, driving meaningful interactions between internal teams and the Open Source community, advocating the use of Cloud Native solutions, and hacking on tools that make life easier for developers and operations folx.
He has previously held SRE/Production Engineering/DevOps-ey roles, as well as customer-facing infrastructure delivery roles at Cloud Native leaders, including CoreOS and Red Hat.

When he's not behind a keyboard or in front of a customer, he's captaining teams in multiple billiards sports leagues.